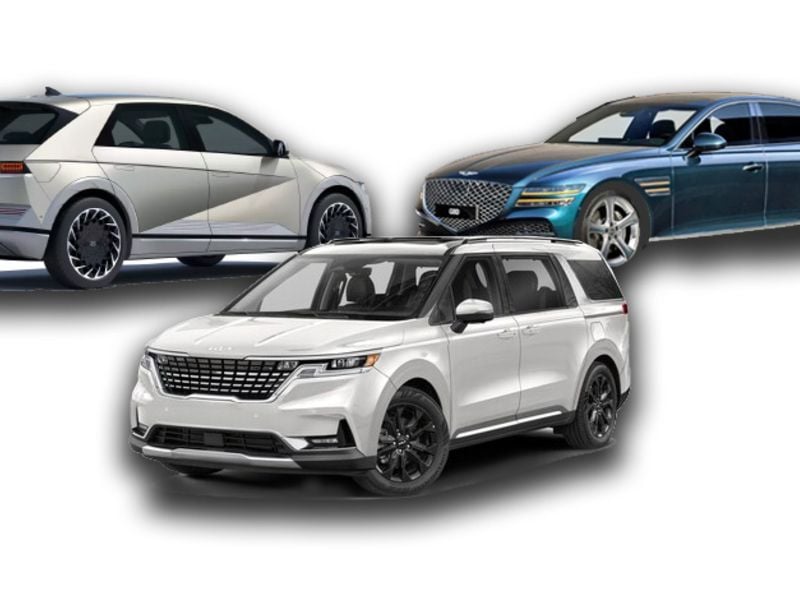 Hyundai and Kia are also bringing some unique products as they build market share.

Hyundai’s first pickup, the Santa Cruz, is arriving at dealerships this month.

Kia is offering an all-wheel-drive, turbocharged K5 midsize sedan with a GT-Line premium package for the 2022 model year, showing its commitment to passenger cars.

The next few years, however, will see a burst of electric vehicles built on Hyundai Motor Group’s E-GMP platform, starting with the Hyundai Ioniq 5 in U.S. showrooms later this year.

Also part of Hyundai’s Ioniq EV subbrand will be the Ioniq 6 midsize sedan and Ioniq 7 three-row crossover that are coming by 2024.

Kia’s first vehicle on the E-GMP platform will come to the U.S. next year as the EV6 compact crossover. Kia will offer both a standard-range model at the low end and an extended-battery awd GT model with 576 hp at the high end. Kia is expected to match Hyundai with sedan and large crossover EVs by 2024.

Luxury brand Genesis is further behind on developing its U.S. lineup but has finally added two new hot-selling crossovers to what had been a three-sedan lineup. The GV80 arrived in November and the GV70 in the spring.

While Genesis hasn’t detailed any plans for hybrid models, it has shown plans for its own EVs. The first has been announced as a battery-electric version of its midsize sedan. The Electrified G80 will go on sale in the first half of 2022 alongside a compact crossover EV, the GV60.

The Genesis crossover will ride on the same dedicated EV platform as the Ioniq 5 and EV6 but will have more luxury features and Genesis “two lines” design touches.

All three brands globally are developing dozens of new EVs combined over the next decade, according to public plans announced by the group.