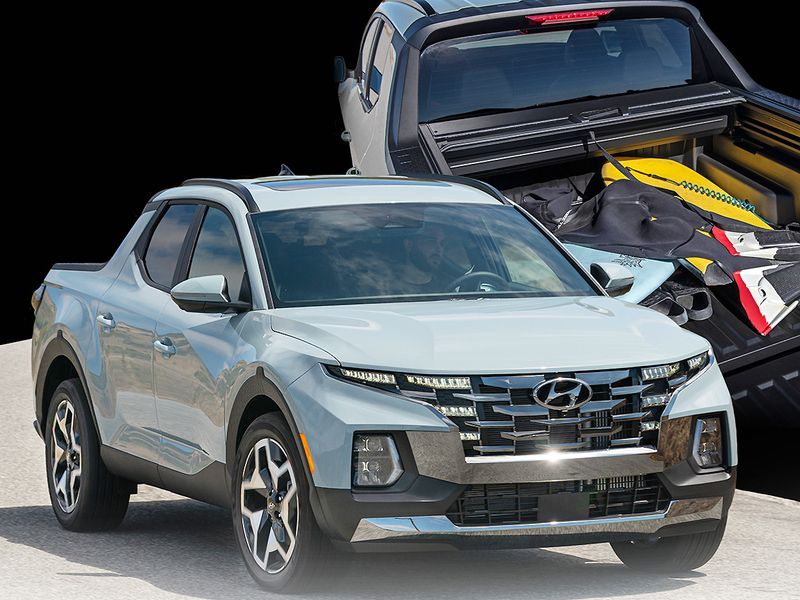 The Santa Cruz can handle 6-foot surfboards or mountain bikes with the cargo bed’s tailgate up, and a 4-by-8-foot sheet of plywood or an adult-sized motorcycle with the tailgate down, according to a Hyundai presentation. It can also tow up to 5,000 pounds, which is more than the Ford.

The Maverick has a standard hybrid powertrain and starting price of $21,490 with shipping, a longer bed and a boxy truck look that will appeal to traditionalists. The Maverick beats the Santa Cruz on fuel economy and price. The Maverick also has the Ford name, imbued with generations of truck heritage.

But the Santa Cruz’s California-designed exterior styling is less generic than the Ford’s, and it contains the creature comforts of Hyundai’s new-generation crossovers, such as digital displays and ventilated seats.

While both vehicles are full of innovations designed to do more with less, neither is a guaranteed success.

What’s unclear is whether either can sustain much excitement beyond their initial launch, and whether consumers who have shunned truck-ish crossovers in the past are now ready to embrace them.

“The question is can either — or both — of them compel nontraditional truck buyers to give them a chance,” said Karl Brauer, executive analyst at iSeeCars.com. “The Maverick is under less pressure to do this, as it can lean on the Ford nameplate to garner a base level of awareness and consideration.

“Hyundai is facing the larger challenge in finding buyers for its Santa Cruz,” he said. “But over the past decade, the Korean automaker has a solid record of meeting these kind of challenges.”

Jessica Caldwell, executive director for insights at Edmunds, echoed that skepticism. “This segment has come and gone in the U.S. with no automaker cracking the code for success,” she said. “So if either company produces significant, lasting volumes, it will be a win.”

The Santa Cruz is first to market, with the Maverick coming in the fall.

Ayman Moussa, CEO of Carnamic auto group in California, said customers have been asking about the first Santa Cruz delivered to his San Leandro Hyundai dealership in the Bay Area, but there have been no preorders yet. “I think it will sell well for its styling and price point,” Moussa said. “It provides a much needed alternative in this segment outside the traditional makes.”

The Santa Cruz is based on a new generation of the Tucson compact crossover that was stretched to accommodate a 4-foot bed. It is built at Hyundai’s U.S. plant in Montgomery, Ala., on the same line as the Tucson and the midsize Santa Fe, which is closer in overall length to the pickup.

The most inexpensive Santa Cruz has a sticker price of $25,175 including with shipping, with front-wheel drive and a four-cylinder engine with 191 hp. The Limited trim with all-wheel drive and a turbocharged four-cylinder engine with 281 hp starts at $40,905 including shipping. The prices are roughly in line with those of the Tucson and Santa Fe — for a reason.

How to Start a Luxury Car Rental Business in Thailand?