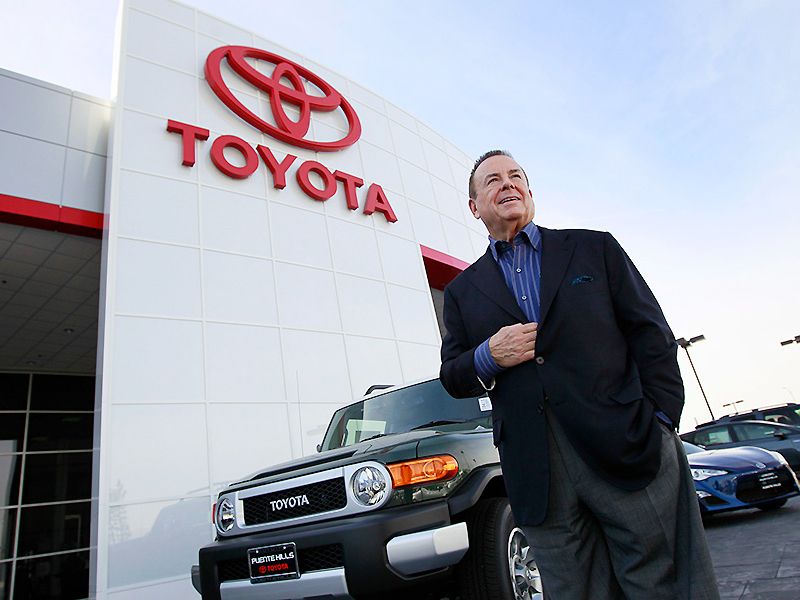 Frederick “Fritz” Hitchcock, a high-profile California dealer who took an active role in the state’s politics and advocated free trade, died Aug. 14 after a fall the day prior. He was 81.

A dealer since 1971, he was CEO of Hitchcock Automotive Resources, a holding company that he founded in 1979 in City of Industry, Calif., to oversee his growing automotive empire that at points included stores representing Toyota, BMW, Ford, Hyundai and Volkswagen brands.

Hitchcock started as a Ford dealer. “He would bring home order sheets and ordered cars at his desk at home,” recalled his son, Ted Hitchcock, now general manager at Northridge Toyota. “He had a passion for this business, and he liked to say he was a student of the game.”

After the gasoline crisis hit in the early 1970s and Ford sales tumbled at his Southern California store, the elder Hitchcock was introduced to the Toyota brand. He took a chance with the promise to be on the ground floor with the growing Japanese brand, said his longtime business partner Howard Hakes.

“He liked the vision of a new product coming in,” Hakes explained. “He thought he could do something with it. He believed in the Toyota future from the beginning.”

Hitchcock began selling Toyotas in 1976, and ultimately pared his dealership holdings to three Toyota stores in Puente Hills, Northridge and Santa Barbara, Calif. The former chairman of the Toyota and Mazda national dealer councils and former president of the California New Car Dealers Association led by example, whether it was in his stores, among fellow dealers or in the community, said Hakes, who worked with him for over 35 years.

“He would always tell our employees that one deal doesn’t make a career,” Hakes said. “If a customer is complaining that something’s wrong, take care of the customer. Take care of them, and they’ll take care of you.”

Politically active throughout his career, Hitchcock was a champion for dealer interests. He was a prominent dealer advocate in Washington, and he worked for the California Chamber of Commerce between 2007 and 2016, including a stint as chairman.

Hitchcock believed that part of living a successful life was getting involved and contributing, Hakes said.

“Fritz loved to give back. He always said that if you’re not involved in what’s going on around you, it’s your fault,” he said. “He really felt from a dealer standpoint, a human standpoint, you need to be informed and be involved.”

For U.S. dealers of international auto brands, Hitchcock was a champion of the free market who strongly believed that dealers could not sit on the political sidelines, said Cody Lusk, president of the American International Automobile Dealers Association.

Hitchcock, a former chairman of the association, “was a true icon of our industry,” Lusk said in a written statement last week. “His leadership and generosity were unrivaled. He fought tirelessly on behalf of his fellow dealers, leading the charge by engaging legislators and policymakers on the issues that mattered most to their livelihoods.”

AIADA named one of its highest annual awards in Hitchcock’s honor in 2016, making him the first recipient.

“With the passing of Fritz Hitchcock, the automotive industry has lost one of its greatest leaders, partners and advocates,” said Bob Carter, head of sales for Toyota Motor North America. “As a long-time Toyota dealer, member of our National Dealer Council and Toyota Dealer Advertising Association, Fritz understood this business is about people and products.”

How Carvana posted its first profit as public company