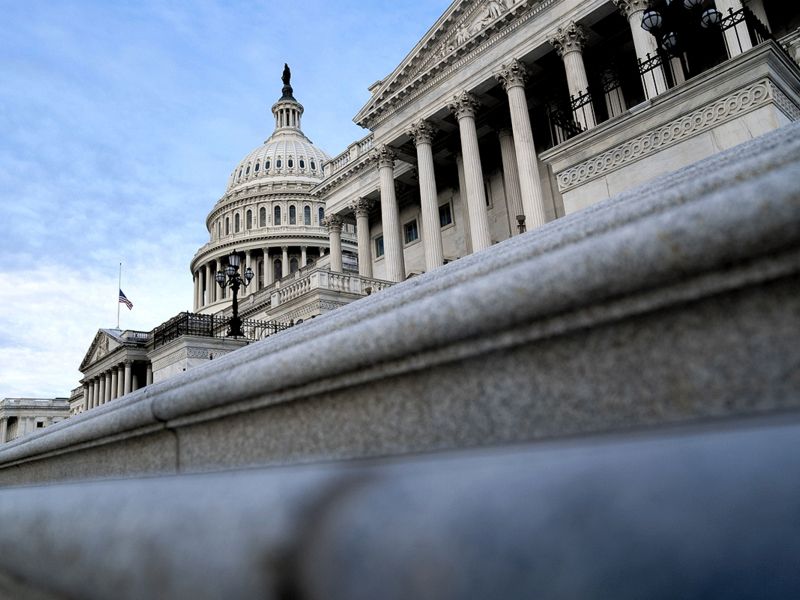 The Alliance for Automotive Innovation, a trade association that represents most major automakers in the U.S. as well as some suppliers and tech firms, applauded the bipartisan effort Tuesday, pointing to the $7.5 billion included for EV charging that can “certainly help jumpstart” public investment in a nationwide charging network.

“While today’s action represents a strong first step, collaboration on a comprehensive strategy will be key moving forward,” John Bozzella, CEO of alliance, said in a statement Tuesday.

Many of the group’s members are working to meet a voluntary goal outlined by the White House for zero-emission vehicles to make up half of all new passenger vehicles sold in 2030. By 2025, the auto industry will have invested $330 billion in EVs, including plug-in hybrids, battery-electrics and fuel cells, according to the alliance.

“We are working with Congress to craft the additional complementary policies necessary to further boost investment in the domestic EV supply chain and incentives that encourage consumer adoption of EVs,” Bozzella said. “Realizing these necessary conditions for a successful EV market will be critical to boosting EV sales from just over 2 percent of vehicle sales now to achieve a goal of 40 to 50 percent EV penetration by the end of the decade.”

Safety advocates argue many of the bill’s vehicle safety provisions cater to industry demands by not setting enough compliance deadlines or mandating regulatory action by NHTSA.

The legislation sets deadlines for the U.S. Department of Transportation to issue rules on automatic shutoff for keyless ignition systems, updated headlamp standards and a requirement for new vehicles to be equipped with drunken and impaired driving prevention technology.

The bill also calls for a rule that sets minimum performance standards for crash-avoidance technology and requires all vehicles sold in the U.S. to be equipped with forward-collision warning and automatic emergency braking systems as well as lane-departure warning and lane-keeping assist systems, though it does not specify a rule deadline or compliance date.

“Firm deadlines for agency actions have been detoured with needless studies, insufficient requirements or not included at all,” Advocates President Cathy Chase said in a statement.

The Center for Auto Safety said the bill is “flashy, took a lot of effort to build and includes some new praiseworthy features, but it remains an unfinished product in terms of making an immediate impact on the 40,000 annual crash deaths in our country.”

The center said it looks forward to seeing a combined version of the Senate legislation and the House’s Invest in America Act sent to the president that includes “the best consumer protection provisions” from both.

Back to the House

House Speaker Nancy Pelosi, under pressure from progressives who want their priorities addressed, has said she will not allow a vote on the bipartisan package until the Senate has passed the broader economic plan. Moderates, meanwhile, are clamoring for the House to take up the bill sooner than that. The House may also seek changes to the infrastructure bill.

Still, the Senate vote after months of fraught negotiations was a crucial first step for both Biden’s economic agenda and his broader hopes of showing the world Washington can work again to solve big problems after a particularly divisive era in American politics.

If the infrastructure package ultimately clears both chambers, every state would feel the effects. It includes about $110 billion in new spending for roads and bridges, $73 billion for power grid upgrades, $66 billion for rail and Amtrak, and $65 billion for broadband expansion. It also provides $55 billion for clean water and $39 billion for transit.

Biden had dispatched top aides to negotiate directly with a group of Republican and Democratic senators putting the bill together and engaged personally with meetings and phone calls. The vote also is a significant achievement for Schumer and the bipartisan group of 22 senators led by Republican Rob Portman of Ohio and Democrat Kyrsten Sinema of Arizona, who stepped in after initial negotiations between the White House and Republicans collapsed in June.

Republicans can claim a victory in that the package includes big spending on their priorities without raising taxes, while Biden can lay claim to an accomplishment decades in the making without including unpopular gas taxes or other levies that would have hit the middle class.

The Senate was unable to get unanimous consent to approve a bipartisan effort to replace a cryptocurrency tax reporting provision with a more narrowly targeted measure that would require certain digital currency exchanges to report data to the Internal Revenue Service. The cryptocurrency industry said the original version unfairly targeted them and was too broad in scope.

Other bipartisan attempts to alter the bill, including an amendment that would allow state and local governments to use some of their unspent Covid relief funds on infrastructure projects, also fell by the wayside.

The Congressional Budget Office said the infrastructure legislation would add $256 billion to the federal budget deficit over the next decade. The CBO has previously forecast the deficit would hit $3 trillion this year alone before narrowing to $1.15 trillion in 2022.

Republicans who opposed the plan as too expensive cited the CBO’s prediction of additional debt and warned the bill could spur additional inflation.

But some of the senators who drew up the legislation contended the bill would be paid for by a variety of means that the CBO couldn’t account for.

Bloomberg and Audrey LaForest of Automotive News contributed to this report.