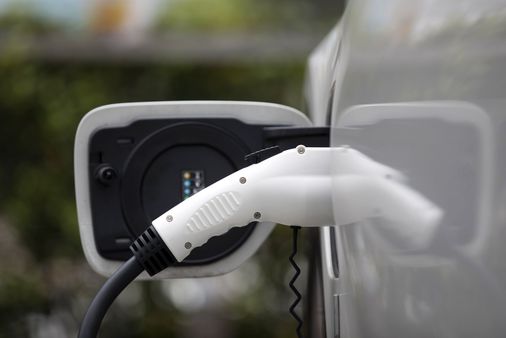 Extreme weather — hurricanes in the South, powerful thunderstorms in the Midwest, wildfires in California and the Pacific Northwest, and ice storms like the one that battered Texas over several days in February cause widespread and prolonged power outages for which EV batteries present a solution. As if the summer of wild weather we’ve witnessed here in the United States weren’t enough of a catalyst to think about plugging into car batteries, the United Nations Intergovernmental Panel on Climate Change’s recent report warning of “widespread, rapid, and intensifying” climate change drives home the urgency.

“All that’s required is that the electric car should be able to do reverse power flow,” says Khurram Afridi, who teaches electrical engineering at Cornell University and is working on wireless charging of electric cars. Most electric cars sold in the United States allow power to flow in only one direction: From the charger to the battery. But this is changing. Ford’s hybrid 2021 F-150 pickup Lightning comes with an onboard generator that can charge up to 7.2 kilowatts. That’s enough to power a small home for three days.

After the Fukushima Daiichi nuclear disaster a decade ago, Kempton says, Japan shut down all 50 of its nuclear reactors. Faced with the ensuing power shortage, utilities resorted to rolling blackouts. Electric vehicle owners, however, tapped their cars as emergency power sources. Japan has since invested significantly in V2G solutions, and Japanese carmakers have been testing the technology for years. In 2018, Nissan introduced a “connected home” that uses a Nissan Leaf and solar panels. During the day, when the sun is shining, the solar panels generate electricity and charge the EV’s battery. At night, the battery powers the home. If there is a shortfall, the electrical grid steps in. The needs of a typical Japanese home “can be provided using a small percentage of the battery capacity, leaving plenty of room for driving,” according to Nissan.

To be able to use an EV battery as a power backup, there are some things the homeowner needs to do. First, they must be able to separate the home from the grid — “islanding,” as it’s referred to by electrical engineers. This usually involves manually flipping a switch, and people who own portable backup generators already do it. This is because “there are strict standards in the United States,” says Kempton, explaining that utility workers trying to fix downed lines after a storm, for instance, shouldn’t be exposed to electricity from an EV battery. “If I forget to kill the breakers, I could kill a line worker.”

In 2019, the average US home used about 30 kilowatt-hours per day, which means the average EV battery can power a home for two to three days. But if the home has solar panels, the number of days it can go grid-free increases. Many companies are already eyeing this space of energy management.

“The future of energy is the consumer harnessing the grid, solar, wind, and EVs for smart electricity consumption,” says Eduard Casteñada, the chief product officer and a co-founder of WallBox, a smart-charging start-up. WallBox sells a popular EV-charger-cum-energy-management system. “If you have an electric car, you will be able to use it to optimize your energy costs,” Casteñada said.

Businesses, too, are looking at using their employees’ electric cars as a backup power source. Southwest Research Institute, a research and development organization with 2,700 employees, headquartered in San Antonio, Texas, conducted a study last year to see whether it could power its campus using EVs belonging to its employees in case of a blackout, according to assistant director Christopher Chadwell, who researches automotive propulsion systems. “You can get power to flow,” he says, “but you need hundreds of cars and lots of equipment.” The study concluded that the cost of powering the institute with backup EV batteries would be too high.

Plugging into EV batteries still makes perfect sense for consumers, Chadwell says. “If you are a homeowner and want to run your AC, washer and dryer, and stove, you should be able to use an electric car.”

Saswato R. Das is a science and technology writer.