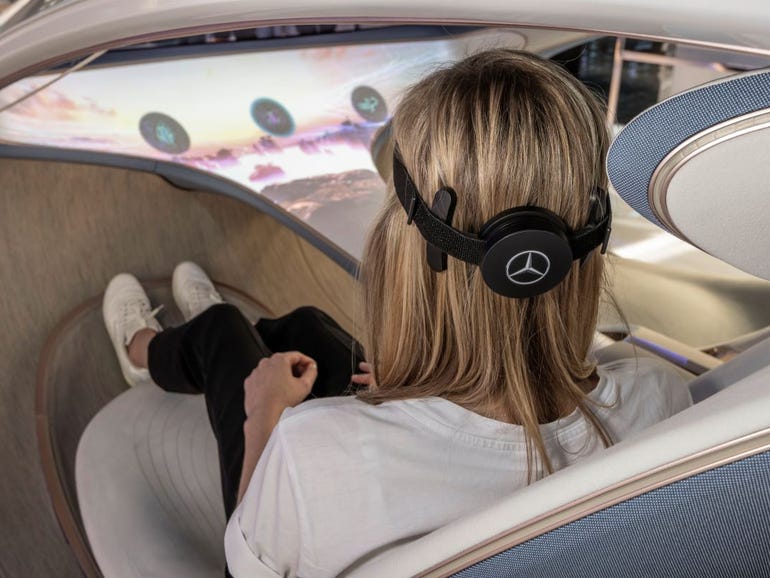 Forget about stuck control buttons, counter-intuitive switches and even inaccurate voice assistance: Mercedes-Benz is now working on a concept car in which you could change radio stations, dim lights or control navigation simply by thinking about it.

The automotive giant presented the idea at the International Motor Show in Germany. Mercedes proposes to use brain-computer interface (BCI) technology to connect human brains to their cars, so that drivers can trigger functions in the vehicle without having to speak or touch anything.

BCIs are systems that can translate brain activity, which is measured thanks to the electrical impulses that happen when we think, into signals that software can understand.

SEE: If we put computers in our brains, strange things might happen to our minds

The technology is pretty much an extension of what doctors have been doing for decades with electroencephalograms (EEGs), which monitor the electrical activity in the brain as way of detecting nerve problems. The difference between the systems is that BCIs then feed those signals into an algorithm that converts them into computer commands – meaning that a user, in principle, could control a computer with the power of their thoughts.

Mercedes has integrated a BCI platform developed by neurotechnology startup NextMind into a concept car called Vision AVTR that was presented at the show. Attendees were able to test the technology, which comes in the form of a brain-sensing wearable that can be fitted onto the head with an adjustable headband.

Electrodes on the headband record the user’s brain activity and establish a direct connection to the vehicle after a one-minute calibration. To optimize the generation of brain signals, different functions on the car’s dashboard are tagged with recognizable, graphic light signals, which stimulate neuronal activity.

The BCI device constantly measures the user’s brain waves, and can recognize on which light points the passenger is focusing their full attention – in other words, those that trigger the most neuronal activity. This is then analyzed by NextMind’s algorithms, which transform the neural signals into a command, such as to select a parking space or switching the car to night mode.

The Vision AVTR is only a concept car, which means that Mercedes is still far from deploying BCI into its commercial vehicles. Introduced for the first time last year, the Vision AVTR rather reflects Mercedes’s engineers’ vision of the distant future, and displays technologies that are still nascent.

For example, the vehicle has no steering wheel, but a central console that launches upon recognizing the passenger’s heart rate and breathing. Raising the hand projects a menu selection onto the palm of the hand, so that users can select certain functions; the outside world is shown in 3D graphics inside the car, and includes the environment’s magnetic fields or ultraviolet light.

“The Vision AVTR (…) is exactly the right concept to test and further develop BCI applications,” said Markus Schäfer, the COO of Mercedes-Benz Cars. “This concept vehicle impressively depicts the future of mobility.”

It remains that, while acknowledging that in-vehicle BCI platforms won’t be available in the near-future, Mercedes is counting on the rapid developments occurring in the field.

The technology is making strides, especially to help advance medical discoveries. For example, BCIs could help people with physical disabilities become more independent by establishing the lost connection between brain waves and muscles, enabling those with nerve damage to move their arms or legs.

SEE: Soon, your brain will be connected to a computer. Can we stop hackers breaking in?

Tesla’s founder Elon Musk has also brought the technology into the spotlight by investing heavily in Neuralink, a startup developing brain implants that could let users control computers with their minds. The business recently released a video of a monkey called Pager wired up with chips that allowed it to play a game of Pong with its brain. Musk has previously said that Neuralink’s prime objective would be to assist people with neurological conditions that are preventing them from controlling hand and arm movements.

“Brain-computer interfaces are going to impact every aspect of our lives and bring incredible benefits to improve our world. We are excited to be partnering with industry leaders like Mercedes-Benz to explore ways to turn these future possibilities into realities,” said NextMind’s Kouider.

As the technology develops, however, so will the opportunity for dangerous hacks. Developers of BCI interfaces could potentially sit on hugely sensitive data: it’s one thing to leak email logs, but another entirely to lose thought logs to hackers. Something to stay aware of, therefore, even if brain-connected cars are still some way into the future.